The dark web is a subject that gets many new internet users wondering what it is and how can such a thing exist. A friend once told me that if a black hole can survive in space, then anything is possible on Earth. Many master users of the internet even often confuse the use of the terminologies “dark web” and “deep web.” One sure thing is that there can never be a deep web or a dark web without the internet. 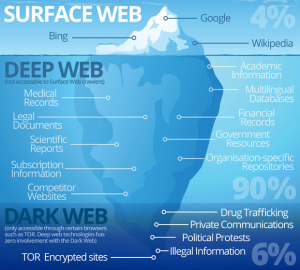 So first, what is the internet? In simple layman’s terminology, the internet is simply a connection of many computers sharing data. Going further, we can say that these computers make use of Internet Protocol Suite to link each other throughout the world. In order words, without one or two networks and data to share, we cannot have the internet.

So now we know what the internet is, so what the fuck is the dark web. Well, the dark web is a part of the internet that is masked or hidden on purpose by owners or users from public search engines and general users. Even with a 10G internet network, you cannot access the files, data, or and even WebPages of anything in the dark web. The dark web exists only on the darknets and as such, can only be accessed using specific web browsers and software.

The deep web on its own is the total of everything placed on the internet that cannot be accessed by the public. This includes registration required sites and forums, even dynamic pages like the Google mail accounts page. Everything available on the internet, but you cannot get a result for when you use a search engine that is said to be on the deep web. The deep web amounts for over 90 % of the data available on the internet, and as such, the public search engines only amount for a little data of what the internet stores.
Why the name DARK
From the little explanations above, it is evident now that the dark web is also a part or lets a small portion of the deep web as well. So why call or name it “dark web”? My friend once said that dark is synonymous to bad hence the name dark web. Well, he may not be far from the truth in this regard (as dark people are not necessarily bad people) because the dark web is used majorly by people who want to do illegal and horrible things without being traced, caught, or even known. People carry out all sorts of illegal deals and terrible actions using the internet as a cover. The worst of crimes are carried out in the dark web, even hitmen hiring.

The usefulness of the dark web

Whatever a person does in the dark web, the person remains anonymous forever simply because the dark web uses a relay of several IP masking and IP changing proxy servers operated by several people across the globe. This simply means that the IP of each of the WebPages on the dark web changes from time to time and so the dark web search engines (Yes, they exists! There are search engines that are specifically designed to crawl pages from the dark web like Grams, and even The Hidden Wiki ) cannot keep up with the pace of the changing IPs and so they end up showing results with Error 404 pages.
The dark web is not only used by bad people for bad and illegal stuff but can also be used for good stuff. The likes of intel exchange, where you can share information anonymously online, access  the dark web Facebook version, and lots more, are the good stuff one can do with the dark web.
If you are a dark web user, you can hire a hitman to help you kill another person, even halfway across the world. The price for hitmen starts at $5000 per hit. You can buy hacked bank accounts for cheap. You can also purchase credit cards (that belong to other innocent people), hacked email accounts, subscription accounts like Netflix, Amazon accounts, and so on. You can even buy stolen credentials of people on the dark web.
Many scammers make use of the dark web, set up e-commerce sites, and make few sales go through to buyers before shutting down unannounced. People can make a run for other people’s money on the dark web without leaving any trace. The most natural place to get scammed is on the dark web. The dark web is growing day in day out thanks to the introduction of cryptocurrency and bitcoin in particular. Because of the peer to peer payment over an encrypted line, dark web users now receive and make payments using bitcoin.  Bitcoin use on the dark web has emboldened the dark web users, especially the scammers and hackers, to do more and girt paid faster.